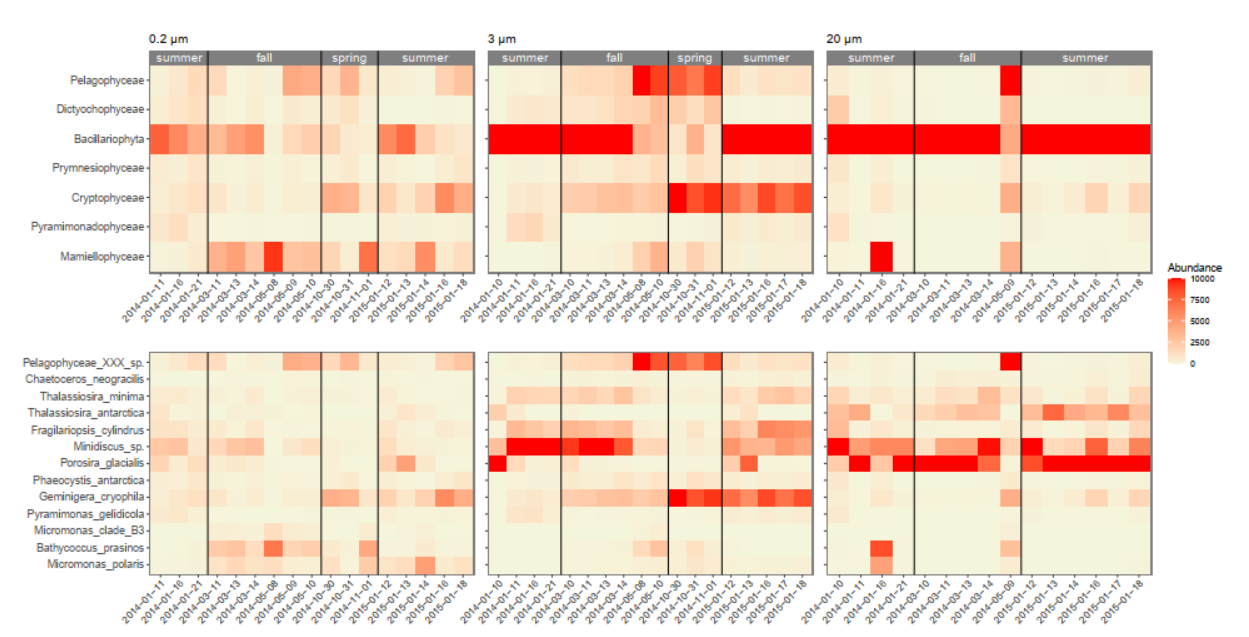 Year-round reports of phytoplankton dynamics in the West Antarctic Peninsula are rare and mainly limited to microscopy and/or pigment-based studies. We analyzed the phytoplankton community from coastal waters of Fildes Bay in the West Antarctic Peninsula between January 2014 and 2015 using metabarcoding of the nuclear and plastidial 18/16S rRNA gene from both size-fractionated and flow cytometry sorted samples. Each metabarcoding approach yielded a different image of the phytoplankton community with for example Prymnesiophyceae more prevalent in plastidial metabarcodes and Mamiellophyceae in nuclear ones. Overall 14 classes of photosynthetic eukaryotes were present in our samples with the following dominating: Bacillariophyta (diatoms), Pelagophyceae and Dictyochophyceae for division Ochrophyta, Mamiellophyceae and Pyramimonadophyceae for division Chlorophyta, Prymnesiophyceae and Cryptophyceae. Diatoms were dominant in the larger size fractions and during summer, while Prymnesiophyceae and Cryptophyceae were dominant in colder seasons. Pelagophyceae were particularly abundant towards the end of autumn (May). In addition of Micromonas polaris and Micromonas sp. clade B3, both previously reported in Arctic waters, we detected a new Micromonas 18S rRNA sequence signature, close to but clearly distinct from M. polaris, which potentially represent a new clade specific of the Antarctic. These results highlight the need for complementary strategies as well as the importance of year-round monitoring for a comprehensive description of phytoplankton communities in Antarctic coastal waters.Competing Interest StatementThe authors have declared no competing interest.